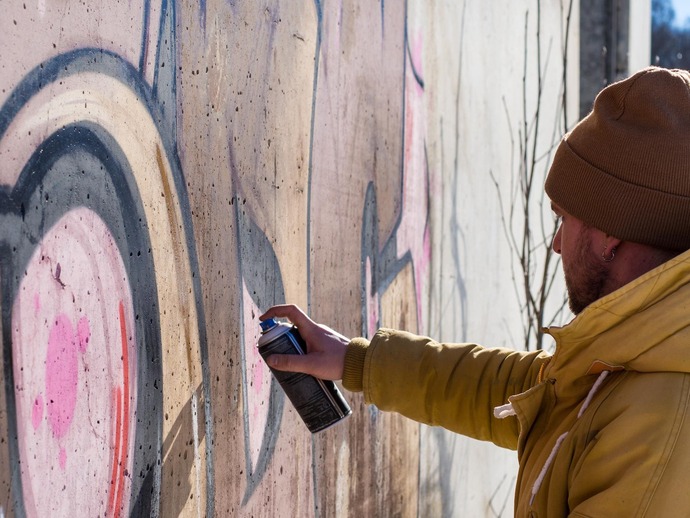 Discover the charm of street art Malaga and let yourself get lost in its neighbourhoods with streets full of art and colours.

The city of Málaga has a large list of offers for visitors, or even for the Malaga’s inhabitants themselves. Today we are going to talk about art in this splendid city.

In recent years, the city of Malaga has become one of the leaders in the art world in Spain, especially if we analyse the urban art scene. In the city there are two emblematic places of Street Art, SOHO and Lagunillas.

Today, Del Paso shows you the two main neighbourhoods where you can find street art Malaga and the works you can’t miss, read on to find out!

Soho, or the arts district, is practically a new neighbourhood. Previously it was a depressed area of the city where prostitution was one of the main activities of the neighbourhood. In 2013 the city council of Malaga started the MAUS Project (Malaga Arte Urbano Soho) to convert a deteriorated area into a modern, different, colourful and very cultural neighbourhood.

Soho is the main neighbourhood where you can lose yourself in its streets and enjoy the art on the walls. Here you can see the mark that some well-known international artists have left and have not missed this great opportunity that Málaga has given to decorate its streets with great works of art such as Obey or Roa, as well as other Spanish creators such as Andi Rivas or Dadi Dreucol.

If you walk around, you can even scan the QR code next to the artworks to find out more about them. Here are the main areas to see street art Malaga:

CAC is a museum with free admission and contemporary exhibitions throughout the year. Just opposite to the CAC (Contemporary Art Centre) you can find a pedestrian bridge with a rainbow bridge painted by Felipe Pantone. Pantone is best known for his optical art and here he makes great use of bright colours that contrast with the black and white ends of the bridge.

On the east side of the river there are also some paintings by Javier Calleja, a new addition to street art in Malaga. On the opposite side is a 130m long mural by Ben Eine, a well-known graffiti artist in the east end of London.

If you turn south towards the sea you can get a view of the giant murals by Obey and D*Face that measures 38m tall by 9m wide.

The streets with the best graffiti are: Casas de Campos, Tomás Heredia, Comandante Benítez, Alameda Principal, Martinez Campos, Duquesa de Parcent or in the very course of the Guadalmedina River.

Lagunillas is another of the cultural and alternative powers of urban art in Malaga. This neighbourhood in Malaga has been marginalised and forgotten for many years. However, nowadays it is a cultural reference and that is showing its head thanks to the impulse that its neighbourhood association has given it. Most of these graffiti belong to the artist Doger and other works by local artists such as Dadi Dreucol, Onze, Lalone, Elalfil or MCap.

Unlike Soho, here everything is more authentic and pure, not so much money has been invested and the evolution has been amazing, becoming a cultural reference point with shops, cultural associations, workshops, social centres, hostels…… The best streets in the neighbourhood to see graffiti are Calle Lagunillas and its perpendicular streets such as Zanca, Esperanza or Pinillos, Plaza Esperanza, Rayito or Calle Vital Aza.

If you want to continue discovering Malaga, don’t forget to read our post about the best things to see in Malaga, Spain. We highly recommend cheap car hire at Malaga airport to visit this amazing city freely. Enjoy your stay!