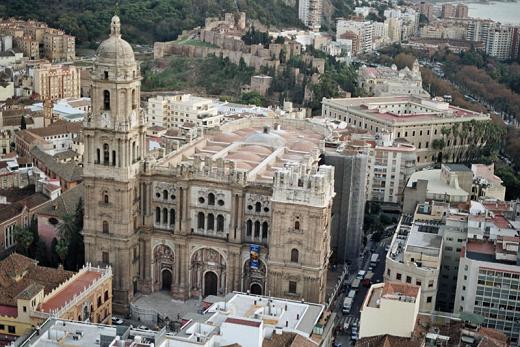 On this post we will talk about the four most emblematic monuments of Malaga city.

The Alcazaba was the palace of the Muslim rulers, which did also work as a maximum security fortress, located in Gibralfaro hill. It was built in XI century on a roman structure. It is composed by 110 main towers, standing out the Homage Tower.

The Gibralfaro Castle was, at the very beginning, a sentry post. It did exist in the roman period, but it was the Muslims who equipped it with its fortress structure. The hill was called “Jabal-Faruk” (lighthouse hill).

The Catholic kings provided the city with the heraldry, and the Gibralfaro Castle was the place chosen for it.

It was designed by Diego de Siloé, and built between XVI and XVIII centuries, and at the end of XVIII, the building work stopped because of royal decree.

The Cathedral presents Gothic, Renaissance and baroque artistic styles. Between its master pieces, one of the most relevant is the set of chairs of the chorus, by Pedro de Mena.

The North tower measures 84 meters, which is the second Andalucia’s higher after the Giralda, in Sevilla. The Southern tower is not finished, since building work was stopped because of royal order. This is the reason why this cathedral is popularly known as “La Manquita” (“one-armed”).

It is located in the western hillside of the Alcazaba Castle. It was built during Augustus’ period and it was used until II century. Then, it was used as a quarry by the Muslims in order to restructure the Alcazaba.

The Roman Theater was rediscovered in 1951. It is composed by grandstand, orchestra (middle part) and proscenium (stage).