How to order a coffee in Malaga

How to order a coffee in Malaga

Malaga is a city that offers pure Spanish culture. You will find most of the things here very unique and different that was only possible in past Spanish times. The architecture of this city is also very unique that will take you exactly to the old times. Also, you will experience amazing art offered by their ancient artists.

Along with all these things, Malaga also reflects its old tradition in its foods. You will have numerous dishes that are still prepared and offered as per in old times. Additionally, you will have to call all the dishes according to their standards because if you call the item as you are used to in your own country, then they will not get that.

Similarly, ordering a coffee is also a big problem for the people that do not belong to Malaga. The names of the coffee according to its strength and quantity that are universally used are not common in this area. They have their own standards to declare the strength of the coffee. So if you ask for the black coffee at any coffee house in Malaga, they will not get it because they call it “solo”.

If you want to have a coffee in malaga take a offer of the best rent a car malaga.

How did it start

This event was started 50 years ago at Café Central. It is the best café at the Malaga. It is actually the founder of this tradition and after that, it spread all around Malaga.

The creator of this system was Don Jose Prado Crespo who had started this system at a small bar where people used to talk and catch-up with friends. This bar after turned into a big café which is now known by Café Central. This place is still running by the founder’s family and offering the most amazing coffee sources in all Malaga. 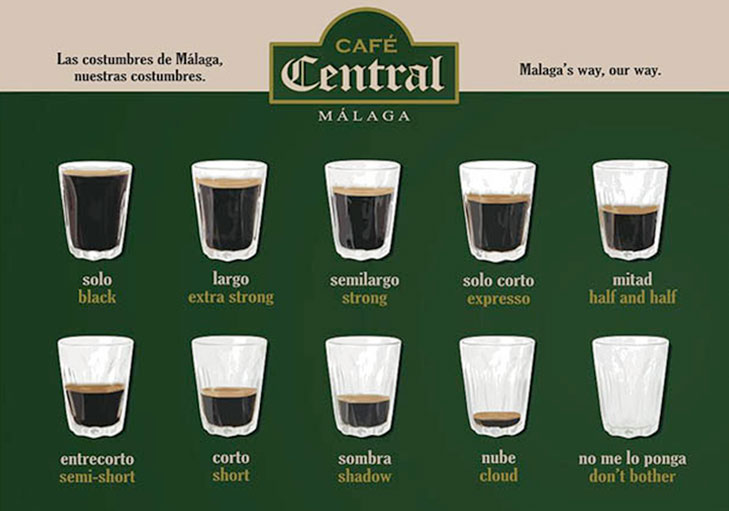 The coffee measuring system is very much unique in Malaga. It has now become part of the Malaga’s heritage. As we have described above that this system was invented by Don Jose Prado. That man invented this system to properly understand what actually the customer is asking for.

During that time, “A finger of coffee” was the traditional way to order the coffee. In this way, people were either end up serving too little or too much coffee with this finger measurement. This thing was usually leading to the wastage of coffee that was not bearable, especially at the time civil war when coffee was difficult to hold up and also too much expensive.

That’s why Don Jose Prado invented this system by which he can reduce the wastage of coffee and also offer the perfect taste to the customer according to his need.
Some of the coffee measurings of this system are described below:

So, if you are in Malaga and want to order a cup of coffee, remember all these names because people at Malaga only understand this system to order coffee.